Backbone of Our Movement: Emma Bagg 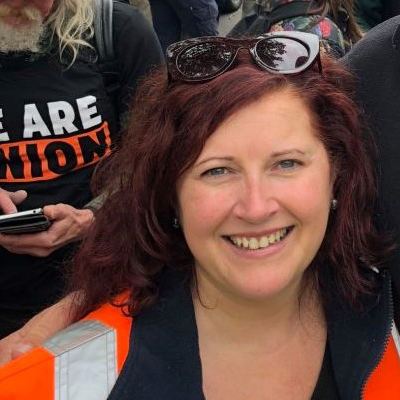 I came from a working-class family, but we never really talked about the union movement, but my family always talked about fighting for workers’ rights.

When I was 15 and working in hospitality, I always questioned my rights and entitlements for myself and other staff. However, it was not until I was 20 and I started work at the Colac Abattoirs and I joined the AMIEU as I realised the importance of being part of a collective and standing together.

When I was the Organiser in the North East of Victoria, one of the sites I had coverage for was Rural City of Wangaratta. When I arrived, members were feeling defeated due to new management team who had created a toxic workplace. Slowly but surely, members allowed me to start taking on a few issues and getting some wins on the board. Some more delegates were elected, we set up delegate networks and new members started to join which then started to build power at their workplace.

We started bargaining the enterprise agreement, the employer wanted to take away some of their conditions by removing wording from the Dispute Resolution Clause that allowed members to dispute written warnings or policy matters. This was the clause we had used to get some wins on the board, so it was no surprise the employer wanted to remove it.

However, the members stuck strong and united as they knew the value of this wording and for the first time since the 1990’s voted on and took Protected Industrial Action. In the end the members won the fight and maintained this condition, but it did not come easy.

The pandemic has really brought out into the spotlight the reality of insecure work across all industries and the need for all of us to work together as a movement.

It is import we grow and build membership, but we need to make sure this also includes building activism and mobilisation as that is how real change will happen.

Being a union member is something to be very proud of as you know you are part of something bigger and that does not leave anyone behind.

If you want a fairer society and to maintain or better workers’ rights, then joining your union is the only way to organise and make real change happen.