Backbone of Our Movement: Joel 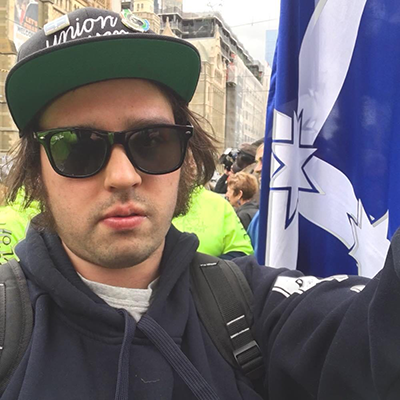 Joel, Delegate for the Rail Tram and Bus Union

I’ve made signing up to the union and becoming active a priority at every job I’ve started at. I’ve been lucky enough to grow up in a family where everyone who has joined the workforce has been a union member. It’s just been the done thing.

But since becoming active myself, I’ve seen how important it is for all workers with a level of union consciousness to organise amongst the broader workplace, whatever the level of density/activity. Every new member is worth their weight in gold and every passive member we can get to become active is worth even more.

In 2018, Metro announced their intent to remove suburban control desks from stations on the Mernda line and move them to a centralised location. This would be a precursor for this to happen across the entire network. Not only would this result in a slashing of station staff jobs around the network as well as deskilling, it would’ve had a severely negative effect on public safety, as having these desks at local stations rather than a city location enables a quicker, localised response to a red button emergency call. Immediately, rank and file station staff from across the network organised and put pressure on the leadership to act on our behalf. We hit stations early, noon and night to also get the public onside. After a few months the campaign was won. The most satisfying part is that the campaign was won on the back of work of largely young, newer members, who have been active ever since.

As the recent scandal surrounding Adem Somyurek highlighted, these pathetic ALP power games are being funded by our unions. Imagine what could be achieved if the resources pumped into funding these power games in a party that really does nothing to help us were redirected toward building rank and file activity at the workplace level, everywhere. That is where and how conditions are going to be improved for workers everywhere, not by begging for crumbs off the ALP table.

As with anything, a group standing together is always going to be stronger than an individual standing alone. You’d be silly not to join your union, but it is up to us members to constantly explain WHY and HOW.