Backbone of Our Movement: Kath Larkin 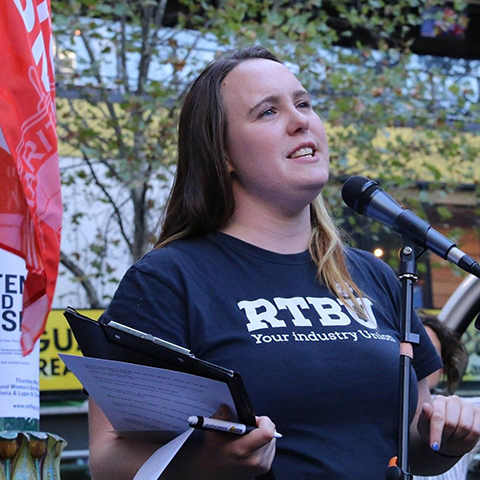 I grew up understanding the importance of not just joining but being an active member of a union. My mother is a nurse and was involved in the rank and file campaign led by Irene Bolger within the nurses union in the 80s, which successfully campaigned to reform the union. Most notably they were able to remove the anti-strike clause in the constitution. And my grandfather was a member of the tramway union and participated in the 1969 general strike to free Clarrie O’Shea. So from my first job in a cafe at 15 I’ve always joined my union.

In becoming a socialist I learnt more about the history of the union movement. I’ve learned that our unions be schools of the class struggle where workers experience fighting for better conditions at work. But also that in times of strength our struggle is broadened out to fighting for the entire class and standing against all forms of injustice, as the NSW Builders Labourers Federation under Jack Mundey did in the early 1970s.

My proudest moment as an RTBU member is when our union took direct action to successfully reverse an unfair and racist sacking of a Vline train conductor. Vline sacked one of our members because he refused to let racist thugs bully international students on his train.

In response to the sacking the union launched a campaign involving members meetings, passing motions and leafleting the public at major stations. Finally we held a snap protest at Southern Cross station in which a Vline service was held up for half an hour.

I was proud to be part of an action that stood against racism, that mobilised rank and file union members and was prepared to take action beyond the extremely restrictive and unfair laws which aim to prevent unions from taking industrial action.

Our priority here and globally must be the rebuilding of a fighting union movement that opposes the inhuman logic of capitalism and refuses to make working class people pay for the crisis. That will fight by any means for safety on the job, for jobs for all and against attacks on pay and conditions. Sadly some union leaders are supporting or even coordinating some of these attacks against workers and it will take a new current of socialists organised in the unions, people like O’Shea, Mundey and Bolger, to make the unions what they should be.

We should take inspiration from the wild cat actions of workers in Italy, Hong Kong and the US as they fight for their lives today. This crisis is just beginning and if you don’t fight you lose.

Every decent thing at work and out of it has come about because of generations of collective organising by union members before you. But under capitalism the bosses will always look to increase their profits off our backs. We need strong unions to protect past gains and to extend them to more vulnerable sections of the working class. So join your union to be part of the fight for a fairer workplace and a fairer world.