Backbone of Our Movement: Michelle Reeves 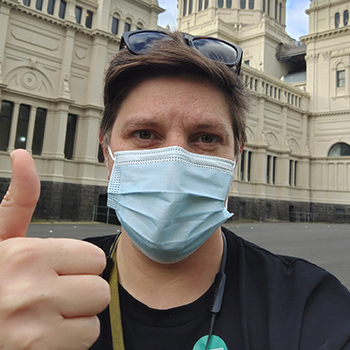 A long time! Joined at 16 at my first workplace with a union presence.

When I was 16, I was lucky enough to be working in a unionised industry!  Most of my team were in the union, had union stickers on their desks, and pamphlets about joining in the break room. Union presence was high, and most workplace matters were discussed through a unionist lens.

This was totally different from the hospo jobs I’d been working in until then, where the conditions were crap and union was a dirty word. Trying to organise around defending our basic rights in those shops was a nightmare. It was so easy to see the power of the union once moving to a unionised workplace, so I joined up right away.

I was working on an IT project that got to a crisis point very late in the piece. It got to that point because the bosses weren’t listening to the warnings we were giving them about the viability of the project.  The bosses responded by installing new management who seemed to be solely tasked with cutting workers out of the decision making process. It wasn’t long before things got drastically worse.

Then, we fought back. Our union delegate was instrumental in forming a core group of representative workers from each team, which took back control of our work and our project. Each morning, all the workers would meet, determine the priorities for the day, and then get to work. A delegate would inform management what would be happening that day, and that was it. That workplace continued to be run by workers until it was no longer in crisis and the project was wrapped up. It was a very unusual, but very empowering thing to be a part of.

Visibility and representation! Working in IT, it’s very rare to have a visible union presence in the workplace, and we are so highly casualised as an industry that it’s difficult to build those relationships.

The IT industry and other highly casualised newer areas of employment operate under some really poor conditions, and are often misunderstood by the broader union movement. This industry is also really vulnerable to undermining of conditions through outsourcing.

I think a key priority for the union movement is to start to build real worker-led representation in these industries, and start making union membership visible in the workplace again. If we’re ever going to have a real connected union movement that represents the working class, we need to really reach out and engage with all the workers and industries that have been left behind. Imagine what a rank and file unionist movement in IT industries could achieve!

Joining is essential to building and growing the movement! If all my workmates joined up tomorrow, we would go from having almost zero presence and representation to practically having our own branch! We’re the people who understand our workplace and our work best, so we need to join up and work together to have a real voice.