Backbone of Our Movement: Vanessa Born 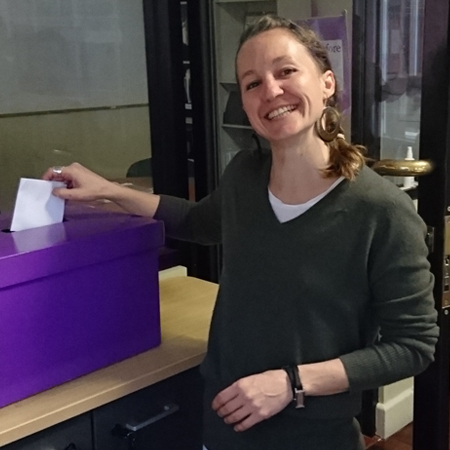 I joined during the Equal Pay Campaign. My dad had always been a union member, but my feminist course at Uni made me think that unions only really helped out men. When an ASU organiser came to visit my workplace for the first time during the Equal Pay Campaign, I asked if I could come and listen to the meeting, and I suddenly realised that unions were for women too, so I joined immediately.

I have a few… but the walkouts of Women’s Health West workers was fantastic. Women’s organisations have for too long expected women to sacrifice themselves and their own health for their work, not even realising that it is these kinds of scenarios that leave women vulnerable to the types of social disadvantage we are apparently meant to be fighting against. It was great to see the organiser, Kristy Lee, so supportive and encouraging of these workers to stand up for their rights and for the health of the organisation overall. It was an inspiration to all of us in that sector!

The need for independence and militancy. Our unions have become overly focused on negotiating ‘on our behalf’, focusing on forming relationships with parliamentarians and bureaucrats and having small meetings and negotiations with them. They have also become overly focused on their most conservative members, and not always supportive of their more militant members. There is enough research to show that unions are powerful when members are powerful, not when organisers are, and especially not when organisers are on a professional path to parliament. Unions should not be places that are dependent on and protective of their relationships with governments, and then too nervous to risk that. What we are seeing too often, is unions talking members down from taking action, and telling them ‘oh, we’re talking with the government on that issue, watch this space’. Or, even more so, workers not even knowing who their union is, because organisers have not gone down to a workplace and made sure there is a delegate there who is supported and able to build their workplace. We need an evidence-based approach to unionism, and not reinventing of the wheel based on some people’s biases, professional aspirations and bizarre obsessions with Obama administration campaigns that have nothing to do with the history of successful unionism.

Because workplace rights are a system wide issue and we need power in numbers to fight successfully for those rights.