Backbone of Our Movement: Zane Alcorn 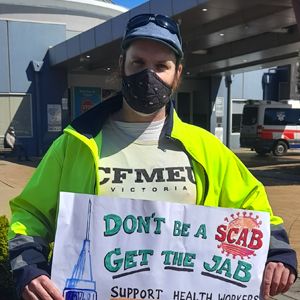 I’ve been a member of the CFMEU for about 6 years and was a member of MEAA and LHMU prior to that. So on and off for about 13 years. Prior to that I was involved in the student union at Newcastle uni and I was elected enviro officer at one point.

Back around 2006 or so I went to a May Day film screening by Green Left in Newcastle and watched “Rocking the Foundations”. Here we go, what’s this boring black and white video these crusty old socialists want to show us, I thought.

Five minutes in and I was spellbound by this riveting account of the BLF Green Bans. I was vaguely aware that the 1960s and 1970s was a time of anti war protest and rebellion but to see Pat Fiske’s brilliant overview of the epic, working class power of the Green Bans was just jaw dropping. Electrifying. Running a rank and file ticket against the old rubbish leadership and overcoming their hired goons. Getting interpreters on the job to involve migrant workers. Strikes for better pay and safer conditions. Getting women into the industry and into the union leadership. Saving parkland and bushland and working class housing from developers. Saving Aboriginal housing in Redfern. Saving Vic markets and other historic buildings in Melbourne. A pink ban at Sydney Uni to get a gay student reinstated. The lessons for today, the relevance to the climate movement are profound, and a source of hope.

I was visiting the Philippines in 2010 and the union for Philippines airline workers, PALEA, was holding a picket at the airport after the company tried to sack all the ground staff and re-employ them on contracts with no job security and about half the previous rate of pay. I happened to be at the picket when a big group of burly strike breakers with motorbike helmets on, under police escort, came and tried to smash the picket under some spurious legal argument that they were blocking the driveway.

The front lines of the PALEA picketers readied to defend themselves and put motorbike helmets on and got sticks. It was looking very sketchy for a minute! After a brief scuffle, with tents pulled down and destroyed, an order from some corner of the court system arrived upholding the right of PALEA to hold the picket and the strike breakers and cops retreated and the workers triumphantly sang “solidarity forever” in Tagalog. It was a moving and beautiful moment. The working class has no borders.

It is all interconnected. We need to rebuild union membership so the working class has more political power. To do that unions need to take industrial action to show to workers why they are relevant. Being a union member isn’t about getting  discounted bloody movie tickets! To take more industrial action unions need to be more independent of the ALP and push for the right to strike. Climate change massively threatens the livelihoods of every future generation of workers. To tackle that, unions need to get involved in initiatives like the climate strike and push a bottom up restructuring of the Australian economy away from coal exports.

The way I described it to my workmates at an EBA meeting recently was that being a member of the union is about having the self respect to know that you are worth it. You are worth the improved pay and conditions that come with unionising your workplace because ultimately you are the source of all the profits the company makes.